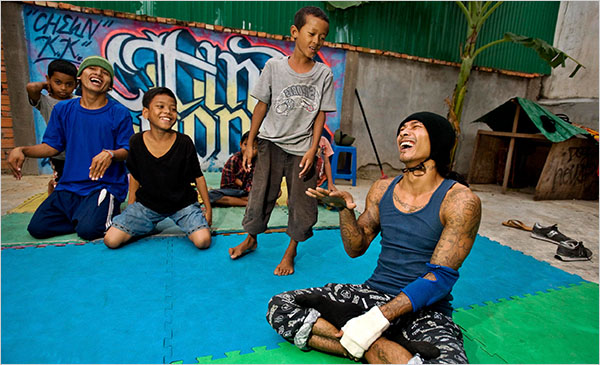 PHNOM PENH, Cambodia — It may be the only place in Cambodia where the children are nicknamed Homey, Frog, Floater, Fresh, Bugs and Diamond.

Tach Piseth, 11, practiced spinning on his head at the Tiny Toones break dancing club in Phnom Penh, Cambodia. The club teaches about 150 youngsters.

And there are not many places like this small courtyard, thumping with the beat of a boom box, where dozens of boys in big T-shirts are spinning on their heads and doing one-hand hops, elbow tracks, flairs, halos, air tracks and windmills. And, of course, krumping.

It is a little slice of Long Beach, Calif., brought here by a former gang member by way of a federal prison, an immigration jail and then expulsion four years ago from his homeland, the United States, to the homeland of his parents, Cambodia.

The former gang member is Tuy Sobil, 30, who goes by the street name K.K. The boys are Cambodian street children he has taken under his wing as he teaches them the art he brought with him, break dancing, as well as his hard lessons in life.

K.K. is not here because he wants to be. He is one of 189 Cambodians who have been banished from the United States in the past six years under a law that mandates deportations for noncitizens who commit felonies. Hundreds more are on a waiting list for deportation. Like most of the others, K.K. is a noncitizen only by a technicality. He was not an illegal immigrant. He was a refugee from Cambodia’s Khmer Rouge “killing fields” who found a haven in the United States in 1980.

He was an infant when he arrived. In fact, he was born in a refugee camp in Thailand and had never seen Cambodia before he was deported. But K.K.’s parents were simple farmers who failed to complete the citizenship process when they arrived.

Like some children of poor immigrants, K.K. drifted to the streets, where he became a member of the Crips gang and a champion break dancer. It was only after he was convicted of armed robbery at 18 that he discovered that he was not a citizen.

Like many deportees, he arrived in Cambodia without possessions and without family contacts. He was a drug counselor at first and then founded his break dancing club, Tiny Toones Cambodia, where he now earns a living teaching about 150 youngsters and reaching out to hundreds more.

With the financial support of international aid groups like Bridges Across Borders, based in Graham, Fla., he has expanded his center into a small school that teaches English and Khmer and computers in addition to back flips, head stands and krumping, or crazy dancing.

Some other deportees have found work that uses their fluency in English, particularly in hotels. Some have reunited with families. But many have slipped into unemployment, depression and sometimes drug use.

“Some were doing well initially but now over time have become unemployed or never did get employment, and just got discouraged,” said Dimple Rana, who works with Deported Diaspora, which is based in Revere, Mass., and helps deportees adjust.

“I know of a whole bunch of returnees whose mothers were sending money from their Social Security,” she said. “Now, with the economy in the United States, it is very hard and families are not able to send even $100 or $150.”

K.K. stands out as a success, both in finding a calling and in embracing his fate. He has a fair command of the language, unlike some deportees who arrived with no knowledge of Khmer.

K.K. is in touch with his relatives in Long Beach but has not seen them since he was deported.

“Right now, you know, these kids are my family,” he said. “I don’t have a kid here, but I adopted one, a street kid. His mom and dad are on drugs.”

The boys and girls leaping and spinning here are the children of Cambodia’s underclass, like thousands who fill the slums of Phnom Penh — children who spend their evenings, as K.K. put it, “begging and digging through garbage to find food.”

“I try to tell them not to judge people by the way they look,” he said. “I still have a struggle here in Cambodia. People judge me. People see me with tattoos and think I’m a bad guy.

His journey between identities reached a point of strangeness when he was invited last December to perform with some of his students at a Christmas party at the United States Embassy.

“The American ambassador gave me a handshake and a hug, and asked me one day when his kid is a little older he wanted to put him in my school,” K.K. said.

The ambassador at the time, Joseph A. Mussomeli, recalled the performance as “great fun,” but he said the piquancy of the moment had not been lost on him.

“You are right that there is a certain wonderful irony to him being ‘rejected’ or at least ‘ejected’ from the U.S. and still landing on his feet — or shoulders and head — dancing,” Mr. Mussomeli said in an e-mail message.

“While watching him I was reminded of that great patriotic speech by Bill Murray in ‘Stripes,’ ” he added, “where he talks about Americans as being rejects from all the good, decent countries of the world! K.K. is/was an American in everything except in law — and he has shown this by his creativity, tenacity, and undying optimism.”

Now another irony is in store for K.K. His club has been invited to send dancers to perform in the United States — Cambodian boys who speak no English and have never left their country.

The real American among them, K.K., deported and excluded from the United States for the rest of his life, must stay behind.

“I can’t go,” he said over the thump of the boom box, as his boys jumped and bounced around him like tiny springs. “I can understand that they deported me here. I’d like to go visit — only visit, because I live here now. I have a brand new life.”